Samba is a Linux tool which enables a Windows (or other Linux) user, to mount a remote drive from a Linux Server onto their Windows machine, creating you a local samba share mount point.

There are various uses for this, maybe you are running out of space on your local pc but have plenty space on a linux server on your local network or elsewhere that you want to utilise as if it was local. Or maybe you are looking to backup your local files somewhere remotely, then Samba is your new friend !!

First you need to install the software, and make it auto start on server reboot.

chkconfig smb on
chkconfig nmb on

Cut and paste the following basic config into your smb.conf which will create you a shared area called storage01 in /home/samba/storage01

Create your shared storage area (rename this to whatever you put in the path in smb.conf)

Add a user and group (from smb.conf) that will be used to access the shared area, and add the user into the smbgrp

Check out -  How to Install MariaDB on Centos 6

And run a test to ensure you entered the configuration correctly

Mount your new shared area on your local pc

Now to make your new area accessible from your local pc….

Open My Computer so you see your standard list of drives. Click on the Map Network Drive button –

Now enter the path in the following format –

The servername can be hostname or ip address, and the mountname is what you put in smb.conf ([storage01] – so here in the config file above it would be storage01)

You need to click the ‘connect using different credentials’ tick box, and then put in the samba user and password you created above – 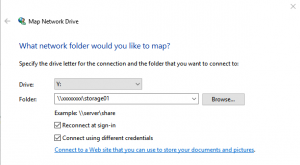