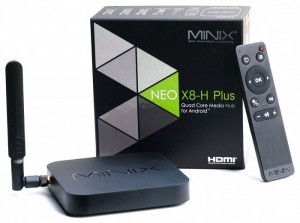 Android Apps are clearly at the core of the Android system. The last few years I have tried to embrace Android as much as I can. The first step was getting my Samsung Galaxy S2 which (apart from the terrible battery life) has been a really good buy.

Then a couple of months ago I was realising my laptop was seriously underpowered and struggling, so started evaluating whether an Android TV box could give me enough functionality to replace my laptop.

After reviewing many different TV boxes I purchased a Minix X8-H Plus. My reasons were based on reviews I had read, the activity in the Minix Forum, the specs of the device were also impressive featuring quad core, 1Gb ethernet, and a host of ports to do everything I could need.

I needed connectivity to my Centos servers, vpn access for work and location detection for watching TV, ability to read mail, ability to take quick notes (notepad on windows is always open on my laptop), and functionality for news, weather, games, and movies.

Android Apps – My Favourites so far :

My first difficulty is that I live in Georgia (in the Caucasus mountains), and getting even free apps from Google Play is very limited, therefore first task was to get a USA vpn. So my first app :

The app itself was not available on Google Play, however their site has the APK which was pretty simple to get working

Then the second task was to get my music and movies from my laptop available on the TV box. No need really for another app as was able to share the drive on my laptop and then read it over the network using ESP File Manager (preinstalled on the Minix). Also made things easier to copy content between my laptop and Android.

Then a responsive and appealing Launcher was needed that I could use with either a mouse or the remote controls. From the Minix forum there was only really 1 choice so my next app is this :

Takes a little while to get used to positioning the icons and working out the styles to make it look really good (ive still not finished it properly yet), but once youve got the hang of it then its pretty simple.

Ok, so now how to watch TV…. It was very important for me to be able to find live football streams. Not being a ‘big club’ supporter this was always going to be harder than if I was a Manchester United fan, but preinstalled on the Minix is their own customised version of XBMC. With the SPORTSDEVIL app I have been able to find most sports channels and live streams. I also then found another cool app which seems to have better quality sports streams from UK and USA, so here it is my next app is this :

With a ton of channels I was able to find all of the Sky Sports channels, as well as a load of USA Sports networks as well so is plenty of choice.

Unable to find apps you want on your device?? Well there is a second easy option to try to find what you are looking for :

Took me quite a while to find the correct app but the above link will do it for you. Basically you want the Amazon Appstore not just the regular Amazon app. Once youve got it installed then your away. It does seem similar to Google Play in that there are location differences in whats available so personally I use a USA vpn using Private Internet Access link above (you may have to clear cache and data on your device so it forgets where you were before) and then you get the whole list of apps available.

Is a few other app stores available for regular and cracked games etc. if you either dont want to pay for some apps, or your device wont let you pay… these 2 seem to work fine for me as ive used them for some games I simply could not find anywhere on Google Play or Amazon

Back to more work related stuff. As you know I am a Unix System Administrator, I write lots of Bash scripts, and administer a large number of servers. I needed a good SSH client where I could add as many servers as I wanted to a list to make it easy to log in to each, to enable my SSH private key on it to keep my connections secure. Ive always previously used ConnectBot (https://play.google.com/store/apps/details?id=org.connectbot&hl=en_GB) but is always good to have a dig around from time to time to see what else is out there, so I found this :

It has absolutely everything I need, is simple to use, can configure as many connections as you want, run multiple sessions at once, and it looks good too!

So there you go, thats a quick (or maybe not so quick) rundown of some of the FREE core apps I currently use on Android. I might add another article later with any updates to the above list, or new apps I find in the future. If you have seen any other useful apps then please let me know so I can check them out!